DOHA, Qatar (AFP) – A series of cartoons about an alien who crash-landed in Qatar, the host country of the World Cup, aims to ease a culture clash between more than a million foreign football fans and the people of this conservative state.

Like arriving fans, Kawkabani, star of the series launched by Qatar’s premier animation studio, must learn Arabic pronunciation, how to drink coffee and find out that Qataris cook way too much food for their guests.

Creators Hossein Heydar and Amal al-Shammari also want Qataris to understand that they will have to make cultural concessions to the beer-drinking, good-time-seeking masses that converge on their country in November and December.

The first two 10-minute episodes of “Kawkabani” – which means “The Nobody’s Planet” in Arabic – have already been released on YouTube by their company, Nefaish Animation.

“As an animation studio, we looked at content in the region, even in Qatar, and we felt there was a lack of content that represents Qatari culture,” said Shammari, Creative Director of Nefaish. .

The Arabic words were sometimes scrambled and the costumes not always quite right.

“We felt we needed a studio in Qatar that pays attention to all of these details and represents Qatari culture in the right way,” he said.

This photograph taken on April 20, 2022 shows an exterior view of the al-Janoub Stadium in Doha, which will host matches for the 2022 FIFA World Cup. (Photo by KARIM JAAFAR / AFP)

The triumph of little Qatar in obtaining the right to host the World Cup gives it the opportunity to show its traditions and customs.

“We want to explain a lot of things and share our culture with visitors,” said Shammari, who wrote the screenplay.

Nefaish only hired artists from the Middle East with knowledge of Arab culture, added Heydar, in charge of animation.

Besides Kawkabani, the series has three main Qatari characters representing what the creators consider to be the main parts of the 270,000-strong indigenous community, which lives alongside more than 2.5 million foreign workers.

Faisal is a traditional Bedouin community that inhabited the desert.

“You know they’re more proud of their culture, and sometimes they overreact,” Shammari said.

But “they would support you no matter what. They will always be there for you.

Saad, another of the Qatari characters, is a more “modern” city dweller. “He’s open to different cultures, he’s open to people, he wants to be a businessman,” the writer said.

As for Khalifa, he represents the growing mixed community in Qatar. Vegan, his mother is British and his father Qatari.

Each of the five episodes of the first series – translated into English, French, Spanish, Hindi, Mandarin Chinese and Japanese on YouTube – shows the Qatari way of life, especially food and drink.

Kawkabani gets in trouble for not knowing the right hand gesture used to indicate drinking too much coffee. 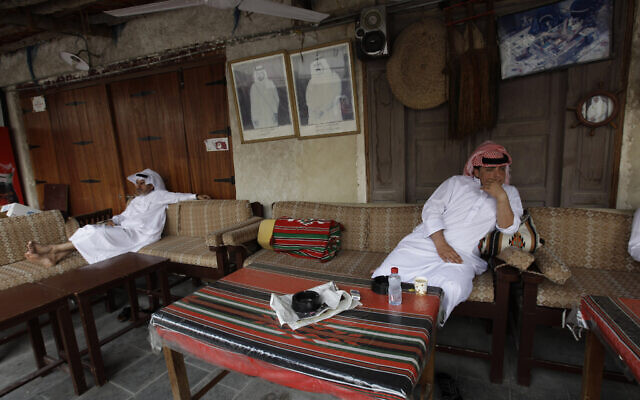 But the series also pokes fun at Qataris.

With up to 1.4 million visitors expected in Qatar for the World Cup, Shammari said the cartoon seeks “to explain to Qataris that there has to be an acceptance of these cultures… and to help them ( visitors) to co-exist or understand Qatari culture as well”.

Kawkabani was partly funded by Qatar World Cup organizers Supreme Committee for Delivery and Legacy, as well as the Doha Film Institute and telecommunications giant Vodafone.

Although early programs did not address controversial issues such as the rights of migrant workers and women, Heydar insisted that there was complete artistic freedom.

“It’s our show and the sponsors have been very supportive of us and they’ve given us all the freedom to make it the way we see it,” he said.

The couple are already planning two more series of Kawkabani alongside other projects to showcase Arab culture.

“Our heritage is full of stories, full of characters, full of heroes and we want to present them from Qatar or the Arab region to the whole world,” he said.

You are a dedicated reader

We’re really glad you read X Articles from The Times of Israel over the past month.

That’s why we started The Times of Israel ten years ago – to provide discerning readers like you with must-read coverage of Israel and the Jewish world.

So now we have a request. Unlike other media, we don’t have a paywall in place. But since the journalism we do is expensive, we invite readers to whom The Times of Israel has become important to support our work by joining The Times of Israel community.

For just $6 a month, you can help support our quality journalism while benefiting from The Times of Israel WITHOUT ADVERTISINGas well as access Exclusive Content only available to members of the Times of Israel community.

Thanks,
David Horovitz, founding editor of The Times of Israel

Elsewhere along the grand timeline, Sankeys rose to prominence in 2011, before its doors closed tightly with unpaid bills in 2017. The Pikes Hotel has regained its bohemian allure. Italian restaurateur Giuseppe Cipriani opened a new 1,000-seat dance hall in Marina Botofoch in 2013, but unfortunately BoOom! was plagued with legal wrangling early on, and […]

Dominican diplomat Porfírio Rubirosa, the “real James Bond” and actress Zsa Zsa Gabor passing through Miami en route to the West Coast to play opposite each other in a film (circa 1960). Culture Shock Miami will present The real James Bond… was Dominican, Friday and Saturday, February 25 and 26 at the Miami-Dade County Auditorium. […]

Priscilla Aguire September 16, 2021Updated: September 16, 2021 12:58 p.m. We don’t drive friendly in Texas. Marco Bicci / EyeEm/Getty Images/EyeEm There really is no place like Texas. As another Texas explainer hits the internet (this time from the Washington Post), a New Yorker’s experience in the Lone Star State has gone viral as she […]